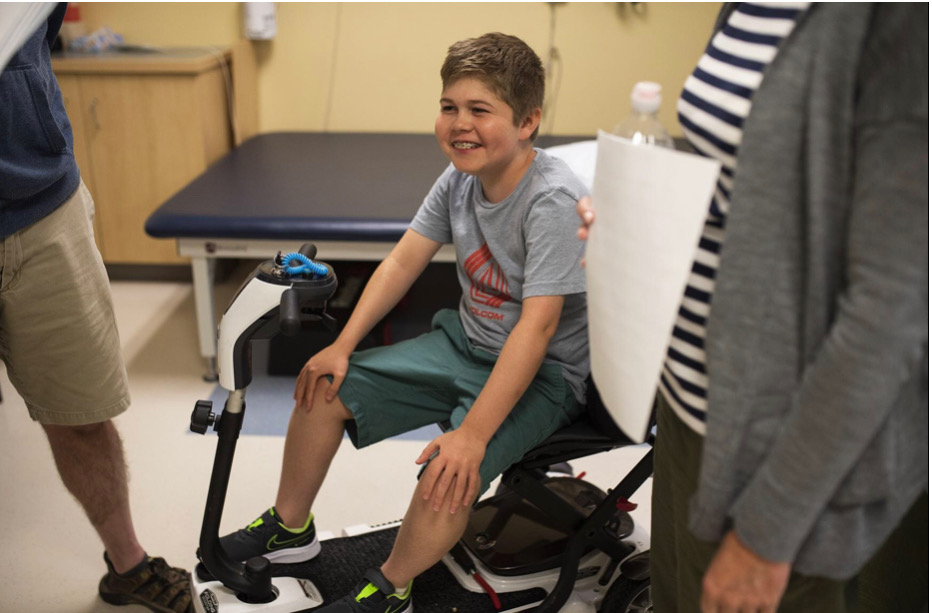 WORCESTER – The Duchenne Program at University of Massachusetts Medical School celebrated its first anniversary in July, and according to its founding director, pediatric neurologist Dr. Brenda Wong, “It looks like we’ve kind of found our feet.”

The program, with a $6 million, five-year commitment from the nonprofit research organization Charley’s Fund, brings together top clinical and research specialists in a family-centered medical home, attracting patients from as far away as Australia.

It is the first such coordinated program on the East Coast exclusively dedicated to Duchenne, its funding partners say.

The clinic has rapidly gotten up to speed, seeing around 250 active patients, and is moving to bridge complex patient care and, hopefully, advances toward a cure for Duchenne muscular dystrophy, a rapidly progressive, fatal muscle-wasting disease that affects one in every 3,500 boys born.

“There’s so much more we can do for them than say, ‘Oh my,’ and share what to expect,” said Dr. Wong.

What to expect with this disease, she said, is “dismal.” Boys lose muscle strength and the ability to walk, develop respiratory problems often complicated with pneumonia, and ultimately succumb to complications from heart and lung deterioration. People with Duchenne face an average age of death of 25.

Duchenne muscular dystrophy is caused by a genetic mutation that prevents the production of dystrophin, a protein necessary for muscle strength and function. The mutation is hereditary in about 70% of patients.

In the last 15 years, new treatments have started being developed and progress has been made in mitigating the significant side effects of steroids, one of the early treatments to show delayed progression of symptoms. For example, Dr. Wong said, with steroids some patients have the ability to walk into their early 20s, compared with others losing that ability by their early teens.

“It’s just addressing the basics,” she said, pointing to working with patients on diet and muscle stretching to help manage the disease. “We found that it works.”

For patients such as Christopher Lee, 13, of Boulder, Colorado, and his parents, Michael and Pamela Lee, the coordinated multidisciplinary care received at the UMass Duchenne clinic is worth the cross-country travel.

Chris, an avid chess player entering seventh grade, has been a patient of Dr. Wong for 10 years, since shortly after he was diagnosed with Duchenne at age 3. His family previously flew to see her at Cincinnati Children’s Hospital Medical Center, where Dr. Wong directed the Comprehensive Neuromuscular Center for 19 years before coming to UMass last year.

“The doctor in Denver said there was not much we could do, for now,” Mr. Lee said. “We didn’t like that. There really was more that we could be doing, even at 3.”

Last Wednesday, Chris saw, in addition to his physical therapist, Dr. Wong and a dietician, and he had a cardiac MRI, X-rays and a pulmonary function test.

On Thursday he would see the cardiologist, pulmonologist and endocrinologist.

The clinic also integrates other specialties such as orthopedics, gastroenterology, nephrology and ophthalmology, and provides child life and orthotics support.

Usually the Lees make their medical excursions in three days, with a day for travel, but last week they took advantage of summer vacation and added a trip to Cape Cod.

The family also travels regularly to Phoenix, Arizona, where Chris receives injections as part of a clinical trial he’s participating in, which Dr. Wong pointed them to.

Ms. Lee said there was a lot of variability in Duchenne symptoms and there are no biomarkers to indicate whether the disease is progressing, but she has noticed “maybe some stability” since Chris entered the trial nearly two years ago.

“I can’t say enough about Dr. Wong,” Ms. Lee said. “Her expertise is just amazing. That’s why we travel to see her twice a year.”

The Duchenne Program at UMass provides a model of care not typically found in today’s health care system because of financial structures.

“I can only see about four patients a day,” Dr. Wong said.

If a medical center receives reimbursement based on patient visits, and those patients’ needs are complex and require lots of coordination, a narrow look at a department budget would show that seeing so few patients isn’t financially sustainable.

But, Dr. Wong said, “Here we find, look at the global delivery (of all services to the patients) and it kind of balances things out. Not many hospitals are willing to do that.”

The coordinated care model, with specialists seeing a patient at the same place on the same day, makes managing the overwhelming cascade of problems associated with Duchenne more manageable for families.

It was UMass leadership’s willingness to “look across the lifespan of medicine,” instead of the silos of department budgets, that led Dr. Wong to get over her fear of cold winters and leave Cincinnati, along with some of her clinical team members, for Worcester.

Partnership with Charley’s Fund, a nonprofit started by Tracy and Benjamin Seckler, of the Berkshire County town of Alford, when their son Charley was diagnosed with Duchenne in 2004, made the move possible.

“Our philosophy is, nothing should stand in the way of the science,” Ms. Seckler said in a telephone interview.

Charley’s Fund leaders took a targeted approach a few years ago to vetting a partner they could work with to bring Dr. Wong’s Cincinnati clinic model to the Northeast, which lacked a coordinated care center.

“We shopped around,” Ms. Seckler said. The foundation was also interested in an organization that would move closer to a cure.

The Charley’s Fund team was impressed by UMass Medical School’s work on amyotrophic lateral sclerosis, or ALS, and its experience “focusing on one thing and doing it really, really well.”

Besides “having the best mind meld” with UMass, Ms. Seckler said, the institution was “extremely entrepreneurial in their vision.”

At the same time, new leadership at the Cincinnati hospital was moving away from the holistic model toward what Dr. Wong described as budgets in silos.

Another factor was that, unlike most other Duchenne clinics, which are located in children’s hospitals, UMass Memorial Medical Center could adapt to serving the needs of patients who are now living into adulthood and facing different issues, such as jobs and sexuality.

Ms. Seckler said that Charley’s Fund hopes to be the driver toward not only supporting families with clinical care but also finding effective new treatments, and ultimately the holy grail for Duchenne: replacing the mutated gene with a healthy copy.

Two clinical trials are underway already at UMass, one for younger patients and one for gene therapy, and at least four more are in development, according to Dr. Wong.

“The research part, too, comes from what we see in clinic,” she said.

She said that with UMass Medical School’s research capabilities and nearby access to biopharmaceutical companies and other cutting-edge medical technologies, “We can do bench to bedside.”

As for Charley Seckler, the boy who inspired his parents’ vision to remove roadblocks to treatment and a cure for Duchenne muscular dystrophy, he walked across the stage at his high school graduation. Now 18, he will enter New York University this fall and live independently in a dorm.