You may remember that in 2017, we teamed up with Duchenne UK and Joining Jack to fund research into the potential of neutrophil elastase inhibitors (NEis) as a treatment for Duchenne. Dr. Dada Pisconti, currently of Stony Brook University, and her team of scientists had a hypothesis that this type of therapy – already in clinical trials for other diseases including cystic fibrosis and COPD (conditions that cause breathing difficulties) – might also help boys with Duchenne. Our grant helped cover several early but critical steps that need to happen to evaluate whether this approach can help slow Duchenne’s progression. The work we funded — which was supplemented by funding from the Medical Research Council — had two key phases: (1) evaluate which of 3 different ‘NEis’ has the most potential and (2) investigate the efficacy of this specific NEi in a mouse model of Duchenne. 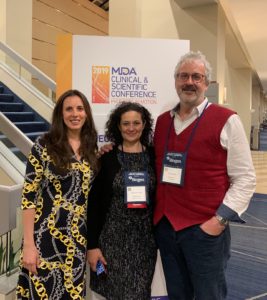 Results from the study are beginning to come in, and today Dr. Pisconti presented preliminary data analyses at the 2019 MDA Scientific Conference in Orlando, FL. It’s important to note that data analysis is not completely finalized yet, and the results still need to go through a peer review process in which external parties help evaluate the findings. At this early stage, the bottom line is that the results so far look promising. Mice treated with a combination of NEi and standard-of-care steroid prednisolone performed better on certain functional tests than with prednisolone alone. Also, certain biological markers indicate that adding an NEi treatment to a steroid regimen may increase steroids’ efficacy while also decreasing their toxicity. This is encouraging because chronic steroid use results in serious side effects. If co-administration of NEis could allow people with Duchenne to be on a lower dose of steroids without sacrificing the benefits steroids provide, that would be a great improvement in care.

Question: First, can you give us a quick refresher on the rationale behind this therapeutic approach?

Dystrophic muscles have more neutrophil elastase (NE) than normal muscles. Elevated levels of this neutrophil elastase damage the muscle cells, promote chronic inflammation and fibrosis, and prevent muscle stem cells from regenerating the damaged muscle. Given the negative effects that are caused by too much neutrophil elastase in the muscle tissue, it seems like a good idea to test whether inhibiting the protein can help ameliorate the dystrophic condition. This potential treatment approach is especially appealing because there are several drugs in this category that are already being developed for other conditions. If preclinical data look good, the path to testing in humans is much shorter than it would be for a brand-new molecule that has never been tested in humans.

Q: Without diving too deep, as you review the preliminary data and results, what would you highlight as the early take-home messages?

It seems that combining a NEi with prednisolone provides benefits in a Duchenne mouse model. Mice treated with a combination of prednisolone and a NEi did better on multiple measures than mice treated with prednisolone alone or with the NEi alone. Mice treated with the combo had lower levels of CK and TGF-beta, markers of muscle damage and inflammation. They seem to have less fibrosis and better muscle regeneration, but quantification of the latter markers still needs more work. Importantly, mice treated with the combo showed improved muscle function as measured by exercise on an activity wheel and hanging bar. Also, and very important: adding this NEi to chronic steroid treatment appeared to mitigate certain negative side effects of steroids, including liver toxicity.

Q: So what could this mean in the context of other research that people are so excited about, such as gene therapy?

Lack of dystrophin causes a cascade of pathological events, which we know participate in decreasing the efficiency of gene therapy approaches. Combining gene therapy with strategies that reduce fibrosis and inflammation, fortify muscle membranes, and promote muscle regeneration is bound to improve gene therapy efficiency. A successful treatment for DMD will take a 360-degree approach. Inhibiting neutrophil elastase could be an effective tool in the arsenal.

Q: Interestingly, the studies suggest that NE inhibition alone does not appear to provide benefit, but a combination of prednisolone and the NE inhibitor provided more benefit than prednisolone alone. If this proves out in peer review and through further research, will you be surprised by these results?

Yes. This is why we are looking more carefully into the fine details of the mechanisms of action of a potential combinatorial therapy featuring a steroid and an NE inhibitor. We are currently working on several hypotheses that might explain these results. Once the current studies are completed, we will have a clearer idea of what the combinatorial therapy is doing in the muscle of dystrophic mice. Hopefully we will find out that the results we are obtaining in mice are indeed translatable to humans.

Q: The data also suggested that a lower dose of the NEi in combination with the steroid performed better than the higher dose. Do you have a hypothesis as to why? What do you need to do to further investigate?

Every drug has “good” and “bad” effects, and finding the right dose and time of administration is absolutely critical for a therapeutic regime to maximize the benefits while minimizing the side effects. It is possible that if too much NE inhibitor is administered, its side effects begin to prevail over its beneficial effects. At this point, in addition to further investigating the mechanism(s) of action of the two drugs combined, we would also like to test various combinations of the drugs, and especially explore lower doses of both.