The Science is on our Side 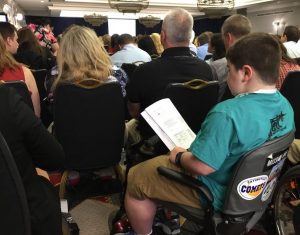 A boy with Duchenne at Monday’s FDA hearing on eteplirsen.

On Monday, the FDA convened an advisory committee meeting to review eteplirsen, a precision medicine treatment for DMD. The purpose of the meeting was to get input from a panel of external reviewers to help the FDA decide whether to approve the first-ever treatment for Duchenne. Charley’s Fund and our initiative The Race to Yes, in collaboration with other DMD orgs and families, mobilized an unprecedented 800+ patients, physicians, and scientists to attend and testify at the hearing.

The meeting got widespread media coverage, and indeed it was big news. But not in the way many outlets have reported it. Some headlines give the impression of a dramatic showdown between emotion and science, with science being declared the winner.

In reality, there is no battle here. There are no opposing sides. The data from the clinical trial, the patient experience, and the expert testimonies are all in agreement. The patient experience was presented in two ways: as a systematic collection of patient reported outcomes, as well as individual testimonies during the open public hearing. Of course emotion was present when the patients presented their stories – how could it not be? But the information gleaned from the patient perspective does not contradict — in fact it supports — data from the clinical trial. Crucially, the hearing included testimonies from the world’s foremost scientific and clinical experts in Duchenne who — without exception – agree that the drug works as intended.

This part, mostly absent in the sensationalist reports pitting the patients’ emotional pleas against the science, bears repeating: Every single Duchenne expert who spoke during the open public hearing — treating physicians, laboratory scientists and some both — testified in support of the drug’s approval. They came from Harvard, Stanford, Johns Hopkins, Northwestern, UCLA and beyond. To each and every one of them, with their decades of experience studying and treating this disease, the data support the drug’s approval.

Distressingly, the way the proceedings unfolded, the case for eteplirsen faced a significant handicap right out of the gates. A thorough review of the proceedings is in order so the problems can be fixed before the next rare disease drug is subject to this biased process. To cite a few examples: Each Duchenne expert was given precisely three minutes, at which point the microphone automatically shut off. When members of the advisory panel asked them questions, they were told, “Sorry but there is no time to hear the answer.” In contrast, the lead FDA reviewer who was highly critical of Sarepta’s data was permitted to continue well past his allotted time. All speakers were required to state any ties to the drug sponsor, while the panel’s chairman did not disclose that he is a recipient of FDA grant funding. Before the voting, he shut down Sarepta’s efforts to respond to key questions raised by panel members. During the voting, panel members struggled with the questions’ wording. One panelist who voted “no” went so far as to say, “…definitely, based on all that I heard, the drug definitely works but the question was framed differently.”

Yet, despite egregious faults in the system resulting in a deck that was clearly and heavily stacked against eteplirsen, the critical vote on the question related to accelerated approval (question 2) was extremely close: (6 yes – 7 no).

To be fair to all rare disease patients who hold out hope for a safe and effective treatment one day, we need more than a quick rundown of the obvious failings that plagued Monday’s proceedings. But for the eteplirsen decision, we are tight on time. The FDA has until May 26th to consider all the evidence and decide on accelerated approval. Thankfully, under FDASIA, the FDA is required to take into account input from patients and outside experts as part of the decision making process, and to factor in the risk/benefit profile of a universally fatal disease with no other treatments. Certain FDA officials such as Janet Woodcock and Bob Temple clearly take this mandate seriously, as was evident from their comments on Monday. Under these circumstances, the only legally, scientifically, and ethically sound decision is a yes to accelerated approval of eteplirsen.