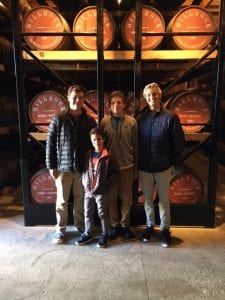 I know a blog is supposed to be regular. But I just can’t shake the notion that something big has to happen in order for me to write a post. That’s why I often let 2-3 months go by between entries — if I’m going to try to grab your attention, it better be about something really major. Last week, though, a tiny uneventful moment triggered huge emotions, and it reminded me: something doesn’t need to be big to be powerful.

Charley and his friend Jackson were hanging out at our house when they decided to grab a bite at The Well, a burger joint in town. They asked me to drop them off, so we piled into the car and headed down to Main Street. When I dropped off the boys in front of the restaurant, my heart sank. I hadn’t remembered that one of the things we love about The Well is its cozy, denlike atmosphere – owing to its location in a semi-subterranean alcove. SHIT. STAIRS.

I sat there in the car watching through the window, trying to process what to do next. And then something amazing happened. No words were exchanged and not a beat was missed. Charley took a small step toward Jackson, who in one fell swoop transferred the backpack he was toting to his right side and leaned down to scoop up Charley with his left arm. They descended the stairs, Charley riding high on Jackson’s left hip. At the bottom of the steps, Jackson put Charley down and they walked into the restaurant.

I put the car in park and sat there to collect myself; I was overcome with powerful emotions pulling me in opposite directions. My chest tightened as I remembered Charley and Sam bounding down those same steps a few years ago. Not long ago he could handle that half-flight of stairs no problem. Duchenne is ravaging his muscles and we aren’t doing enough to stop it or slow it down. He’s drowning and we’re not moving fast enough to save him.

At the same time, a profoundly simple image pulled me the other way. Charley, happily chatting with his friend in the cozy pub, sinking his teeth into a medium-rare grass fed burger on a soft bun.

It was such a strong jolt of simultaneous grief and joy. Amazingly, the sorrow didn’t block out the happiness. The grief brought the joy to light. In the absence of that deep sadness Duchenne has brought my way, I most certainly would not be feeling intense joy at the prospect of my teenage son eating a burger with his friend.

My purpose is not to say that we all must experience tragedy in order to be grateful and joyous for life’s simple pleasures. Frankly, I’m not even sure what my message is. I just know that when I saw Jackson intuitively, wordlessly scoop up Charley to bring him down those stairs, I was so overcome with emotion that I had to put the car in park and sit for a moment. It was a deceptively huge moment hidden in a seemingly uneventful, simple gesture. So I wanted to write about it.