Thrown for a Loop 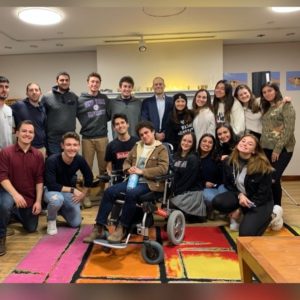 Charley at an NYU club meeting, before the term “social distancing” became a household phrase.

I know irony is supposed to be bitter, but this one borders on the absurd. Amazingly and against all odds, Charley made it to college in New York City. He lived in a dorm, joined some clubs, even managed to pull down a B+ average. He studied for hours at Think Coffee, discovered Tompkins Square Bagels, and found a couple of bars that would serve him a beer. He made some friends, went on a few dates, and pledged a fraternity. I know this might sound mundane, but for Charley it was glorious.

Courageous, determined, and positive in the face of challenges that many would consider insurmountable, Charley found a way to put Duchenne in its place and carry on with (almost) everything he has always wanted to do. And then it all came to a screeching halt.

We picked Charley up on March 12, a day before Spring Break started. Thinking he’d be back in ten days, we left most of his stuff in his dorm room. Now here we are, six weeks later, suspended in time at home in Massachusetts, with no idea what the future holds. “I waited my whole life to get somewhere,” Charley told me one recent night when we stayed up late talking. “And now it doesn’t even exist.”

The crazy part is this: we knew that Charley’s college experience could be abruptly disrupted at any moment. As a Duchenne parent, you’re always sleeping with one eye open. Always on high alert for the fall that breaks a femur or the cough that could lead to pneumonia and pulmonary distress. We figured we knew what could happen and that we were as prepared as we could possibly be to deal with it. But I guess none of us ever really know what’s coming.

The coronavirus pandemic came from so far out of left field, we were — and truthfully still are — caught off guard, thrown off our game, confused about what to do, what to say, how to feel. And anxious about what will happen next.

Uncertainty is frightening. So during my late-night talk with Charley, I defaulted to my comfort zone. I focused on the bright side, doggedly. “You needed some rest anyway,” I told Charley. “At least you’re not a senior; that would really suck, to miss graduation and everything.” But Charley called me out on my Pollyanna attitude. “Some things are not solution-oriented,” he explained. “They’re just bummers.”

Charley’s “bummers” are unique to his own experience, but it seems like everyone I know is facing something new and unexpected and harder than we thought it would be. My oldest son had to come home from his study abroad program in Thailand and cancel the pan-Asian travel adventure he spent hours on end planning. My niece will not experience her college graduation, and she abruptly has zero job prospects once she gets her diploma. My parents are unable to see their grandchildren for the longest period of time they’ve ever gone. My good friend was forced to close her fledgling small business, which had been a labor of love for the past several years. Another friend lost his dad to COVID and then, less than two weeks later, his mom succumbed to the virus too.

Varying degrees of tragedy, to be sure. But sadness isn’t relative. It’s absolute. If you feel it, you feel it. It doesn’t really matter what the reason is. My natural tendency is to try to sanitize sadness or wipe it away, like I do with the groceries. But Charley’s straight-talk during our evening chat reminded me that it doesn’t work that way. Acknowledging and verbalizing the shitty feelings actually helps them ultimately recede — or at least live side by side with the good ones like love, joy, and laughter — in a manageable coexistence. I know a lot of people who have lofty goals during this unprecedented time: organize every closet, cook every meal from scratch, meditate every day. For me, during this precarious moment in our lives, it’s enough to focus on each day, one day at a time. If I put my head on the pillow at night knowing that all kinds of feelings had space to breathe that day, I feel like I’m doing ok.