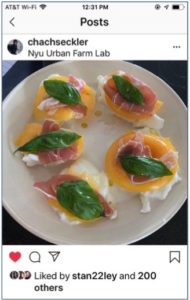 Charley made this for lunch today. I know it’s just a midday meal, and I know that people have a tendency to over-share photos of their food on social media. But I love this creation and wanted to share it with you because I feel like it symbolizes Charley’s whole approach to life. Bear with me here.

Charley’s starting NYU as a freshman in the fall. He’ll be in the Food Studies program, a major that explores the cultural, historical, and sociological aspects of food. To get used to college-level work and start learning his way around the city, he enrolled in a summer course called “Intro to Urban Agriculture.” This morning he harvested fresh basil from the NYU Urban Farm Lab, a mini-oasis where vegetables and herbs grow right in the middle of West Houston Street.

When class was over, he moseyed over to Eataly to buy some ingredients that would go nicely in a dish inspired by the fresh basil. Now that might not sound like a big deal, but it kinda really is. New York is a tough city to navigate in a wheelchair. Only a few of the subway stations have elevators, and it’s not uncommon for the few that do exist to be out of service. The second day Charley took the subway from his grandparents’ apartment on the Upper East Side down to NYU, he arrived at Union Square station only to be met by a broken elevator. He was stranded underground with 5 minutes to make it to class. He sized up all the people walking by, calmly waiting until he spotted the “right” people — a relatively young couple, unencumbered by a ton of bags or a baby stroller. Then Charley made his move – he asked for help. The guy scooped Charley up into his arms and carried him up the stairs while the woman lugged the wheelchair up to street level.

After that experience, Charley knows he has what it takes to get pretty much anywhere, no matter what obstacles arise. And today he wanted to make the most of that fresh-picked basil, so off to Eataly he ventured. Upon arrival at the foodie heaven, Charley called me to marvel at the bounty. The mozzarella looks insane mom. Do you think it’s imported from Italy? Or do they hand roll it right here? He took his time deciding whether to splurge on a small bottle of truffle-infused olive oil, thoughtfully weighing the pros and cons of blowing 20 bucks on four ounces of liquid ambrosia. He tasted several varieties of prosciutto before selecting the one he would pair with his other delicacies.

Back uptown (Q line elevators were working today!), he artfully arranged his carefully chosen ingredients on a plate. Then he texted a photo of his creation to his brother to let him know that something special would be waiting for him when he got home from work.

So there it is in a nutshell – Charley’s approach to life, as lived in one afternoon’s experience: Pursue your passions. Don’t give up, no matter what obstacles stand in your way. Savor everything good, even (especially?) the simple things. Share it all with love.