I recently came across some old photos. They depict Charley in fifth grade winning a dodge ball tournament. Yes, you got that right. As you likely know by now, Duchenne muscular dystrophy means you can’t play sports like most other kids your age. The disease weakens muscles, which makes running, throwing, even walking difficult and then impossible. And the only treatment that’s proven to slow loss of muscle function (daily steroids) wreaks havoc on bones, making them extremely brittle and prone to fractures. So… dodge ball? What were we thinking?

The pictures trigger a crystal clear memory of that day back when Charley was in middle school. When I found out there was a dodge ball tournament to raise money for the student council, I strategically planned a dental checkup for Charley so he would conveniently miss the fundraiser. Meanwhile, unbeknownst to me, he formed a team with some friends and registered to play.

The day before the tournament, I told Charley he had a dentist appointment the next afternoon and I would pick him up early from school. His response? “OK but we have to be back by dismissal because I’m playing in a dodge ball tournament. My team is counting on me.” I remember looking in the rearview mirror to see if I could learn anything from his facial expression. Was he deluded? In denial? Defiant? “We have it all figured out mom,” he explained. “I’m their secret weapon. No one is gonna want to hit me!” 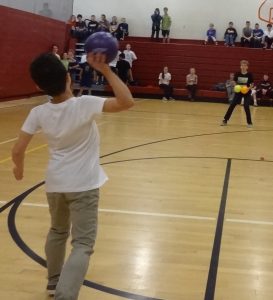 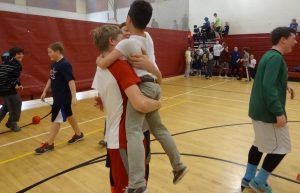 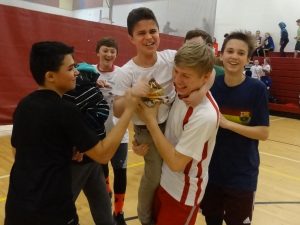 As you can tell from the photos, their strategy was ingenious.

Charley just turned 18; he’s now a senior in high school. So why write about a dodge ball tournament from seven years ago? Those photos deeply affected me – the joy on Charley’s face, the sheer happiness of his friends surrounding him with love, the beautiful absurdity of a physically disabled, fragile child winning a dodge ball tournament. They just made me feel so good. So I looked at them for a long time.

I’ve always been mystified and amazed by Charley’s ability to live such a rich, full, joyous life despite Duchenne’s ominous, ubiquitous presence. But looking at those pictures gave me some insight into how he does it. It’s almost like a scientific formula he relies on to produce a positive result every time:

Focus on your unique value
+

Surround yourself with creative, kind people
who embrace all the positive things about you

Last summer, Charley got a job at a local coffee shop. He physically could not do some of the work his coworkers did, like stocking shelves and operating the sandwich press. And he had to sit on a stool while working the cash register. I was grateful to the owner for hiring Charley even though he couldn’t do 100% of the work required, so I emailed him a note of thanks. “Are you kidding me?” He wrote back. “You think I get 100% productivity out of any of my staff?! He’s a confident kid. We’ll get our money’s worth.” Charley’s co-workers also embraced his strengths and didn’t worry about his weaknesses. They valued his welcoming smile, the effortless way he engaged customers in conversation, and his tendency to make them chuckle by ALWAYS forgetting to ask “Is that for here or to go?”

At 18 years old, Charley most definitely cannot play dodge ball anymore, no matter how ingenious of a strategy his friends may invent. In fact, he can’t even work at the coffee shop at this point, even with generous accommodations from his coworkers and boss — repeatedly getting up from the stool to serve coffee has become too demanding on his weakening muscles. There’s no way around the fact that this physical deterioration is enormously sad. Charley’s “formula” doesn’t solve the problem by changing his reality or by making the sadness that inevitably comes with it disappear. But it renders that sadness less powerful, puts it in its proper place.

I’ve often thought that if I could bottle up Charley’s attitude and sell it, we’d have enough money to cure DMD ten times over and help make a lot of people happier along the way. Obviously I can’t do that, so instead I’m doing the closest thing I can: Observing, reflecting, and sharing. Hope it helps!