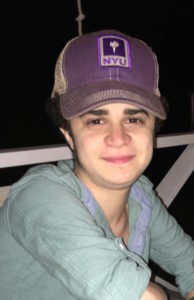 When Charley got accepted to New York University (the college of his dreams), I was petrified. While my friends’ kids — and my kid’s friends — were excitedly meeting roommates online and looking at course guides and posting “Class of 2023,” I couldn’t bear to look even a day into the future. It was December 2018, and I didn’t even know if Charley would be physically strong enough to live on his own by fall of 2019. He was accepted to NYU, but because of Duchenne we were not sure at all if he would actually make it there, let alone get through four years and graduate in the class of 2023.

I could have been paralyzed with fear, but instead I was paralyzed with joy — the joy of that moment. I didn’t look ahead; I just relished the experience. I watched the video his sister managed to capture when he found out he got in. I watched him shriek with joy over and over, and I smiled and cried (the good kind) every time. I don’t know how it happened, but Benjy and I both somehow decided that we would be happy in that moment and not ruin it by worrying about what might happen next. We never consciously decided that’s what we would do; it just happened. It’s almost like we had an unspoken — maybe even unconscious — agreement that this moment was too sweet, too incredible, too joyful to taint with even a moment’s thought about what the future might entail. So we went with it. And we’ve been doing that ever since.

People often ask, “So how do you like the empty nest?” Every time, I break into a huge smile and stumble for words. There really are no words I can think of to describe the joy we feel in this moment, the gratitude that Charley has been given this opportunity to experience college in New York City on his own and that Benjy and I have been given the opportunity to rediscover each other without the constant responsibilities of driving kids all over the county, folding endless loads of laundry, and coming up with recipes for dinners that are simultaneously dairy-free (Maisy), uber-healthy (Charley), and protein-packed (Sam).

I know this experience might not last as long as it likely would for a typical young adult. I know Charley could trip and fall and break a leg (again). I know he might need assistance with daily self-care sometime soon. I know his next MRI might show the dreaded decline in cardiac function. But right here, right now, we are lucky and joyful filled with gratitude for this moment. It works no matter where you are in life, and it’s kind of addicting. So give it a try.