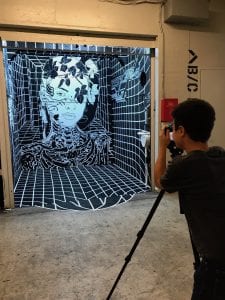 Charley at work this summer in Brooklyn

Of course he can’t really move around all that great. One city block is about the maximum distance he can walk at this point. And throughout his day, all sorts of obstacles pop up by the minute: A door that’s too heavy to open. A subway station with no elevator. Three huge stone steps at the entrance to a storefront. Required summer reading that his weakening arms can’t carry.

But roadblocks be damned, Duchenne did not get in the way of nonstop activity for Charley during the Summer of 2017. During his time off from school, he was determined to get out and work, play and live life to the fullest. He got a part-time job at a local coffee shop, manning the register and serving drinks. He had to sit on a stool and rely on his colleagues to do the literal heavy lifting, but his employer and fellow baristas seemed truly happy to have him on the team, and he was a whiz at taking orders, charming customers, and checking them out at the cash register.

In July we ventured off to Spain with Charley’s best friend in tow. The two of them zoomed around three Spanish cities, using a transport wheelchair so limited mobility would not drag them down. They tried every exotic food they could get their hands on, from escargot to sardines grilled on an open fire to pig’s nipples served in a ceramic sow!

After that trip I was ready for some down time, but Charley doesn’t do “down time.” He worked his personal network, and through a relative secured a two-week internship in New York City. He worked in the design and marketing departments at Industry City, a massive redevelopment project in Sunset Park, Brooklyn. After a few hours of hard work each day, he and his friends treated themselves to some really special nights out including a Yankees game, an omasake-style sushi dinner, and a J Cole concert at the Barclay’s Center. Work hard, play hard!

When Charley was first diagnosed, Benjy and I spent many nights crying over the things Charley would never be able to do. Some of those things he most certainly cannot do, like waterski or play tennis or compete on a varsity team. But there are plenty of things on that list that he is doing anyway, despite our dire predictions… working a summer job, living with friends in New York City, planning for college.